Next year’s Hamilton and Sydney legs of the World Rugby Sevens Series have been cancelled. 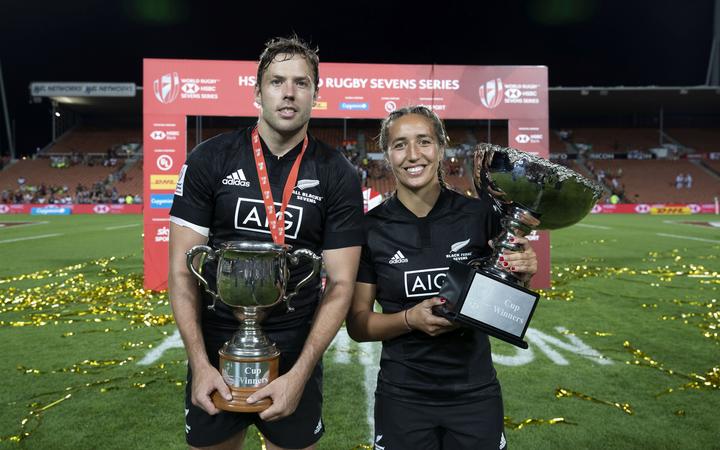 All Blacks sevens co-captain Tim Mikkelson and Black Ferns sevens captain Sarah Hirini with their trophies from the Hamilton Sevens in 2020. Photo: Photosport

World Rugby made the announcement due to the continued global uncertainty surrounding the Covid-19 pandemic.

In March, World Rugby postponed all remaining tournaments in the 2020 series, while last month the opening rounds of the new series set down for Dubai and Cape Town later this year where cancelled.

“We’ve had three great years in Hamilton and were planning to take the tournament back to FMG Stadium Waikato again next January, but we understand and support the decision to cancel.”

The Hamilton and Sydney rounds of the World Rugby Sevens Series 2021 had been provisionally scheduled for 23-24 and 30-31 January 2021 respectively. NZR’s four-year licence to host a World Series tournament remains in place through to 2023.

The All Blacks and Black Ferns Sevens teams’ schedules had been disrupted, but Lendrum said contingency plans were well advanced to ensure both teams were well prepared for the Tokyo Olympics.

“The goal of our sevens teams to succeed at the Olympics hasn’t changed and our high-performance team have done a great job ensuring the players remain fit, focused and informed.”

Most of NZR’s contracted Sevens players would be involved in the Farah Palmer Cup and Mitre 10 Cup respectively. An Oceania invitational tournament in early 2021 was also being discussed, while World Rugby was working on an abbreviated World Sevens Series schedule.

Meanwhile, World Rugby announced it would provide a $3.5 million grant to support Olympic-qualified teams prepare for the Games.