Thousands have attended rallies across France in support of Samuel Paty, the teacher beheaded after showing cartoons of the Prophet Muhammad to his pupils. 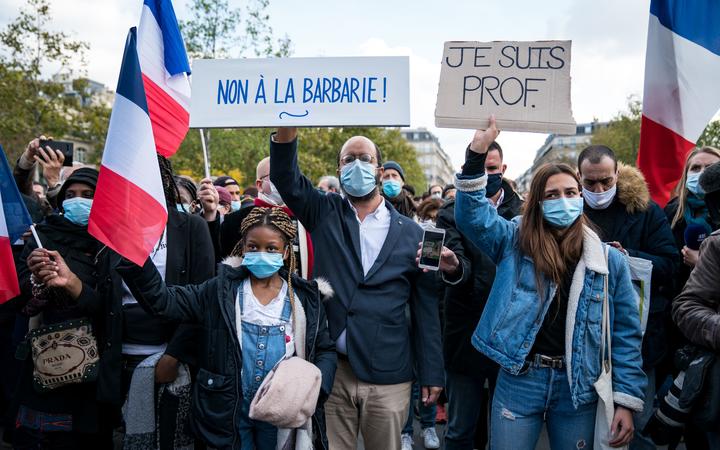 Thousands of people gathered this Sunday in Paris to pay tribute to Samuel to Samuel Paty, the professor beheaded in a terrorist attack on Friday. Photo: AFP

People in the Place de la République in Paris carried the slogan “Je suis enseignant” (I am a teacher), with PM Jean Castex saying: “We are France!”

A man named as Abdoulakh A was shot dead by police on Friday after killing Paty close to his school near Paris.

An 11th person has now been arrested as part of the investigation.

No details have been given about the arrest. Four close relatives of the suspect were detained shortly after the killing. Six more people were held on Saturday, including the father of a pupil at the school and a preacher described by French media as a radical Islamist.

President Emmanuel Macron said the attack bore all the hallmarks of an “Islamist terrorist attack” and the teacher had been murdered because he “taught freedom of expression”.

The murder comes as a trial over the 2015 attack on Charlie Hebdo – a satirical magazine that has published cartoons of the Prophet Muhammad – is under way.