Tens of thousands of Thai protesters cheered and chanted into the night in central Bangkok in a show of mass defiance to a ban on demonstrations designed to end more than three months of anti-government action.

As they dispersed at 10 pm on Thursday protesters pledged to return to the same place every day. 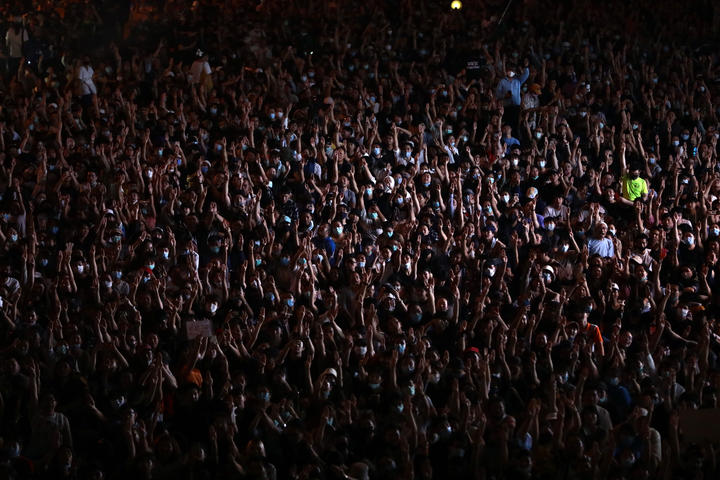 Thousands of pro-democracy protesters rallied in central Bangkok late into the evening, raising the three-finger salute that has become a symbol of the protest movement. Photo: AFP

Growing demonstrations have targeted King Maha Vajiralongkorn as well as Prime Minister Prayuth Chan-ocha, a former junta leader, in the biggest challenge for years to an establishment long dominated by the army and palace.

“Like dogs cornered, we are fighting till our deaths,” Panupong “Mike Rayong” Jadnok, one the high-profile protest leaders who remains free, told the crowd. “We won’t fall back. We won’t run away. We won’t go anywhere.”

Protesters ignored police appeals to disperse and spilled from the Ratchaprasong Intersection across streets and walkways, their mobile phones shimmering in the night. The location was the scene of bloodshed in 2010, during more than a decade of violence between supporters and opponents of the Thai establishment.

“All protesters will be prosecuted,” the deputy head of Bangkok police, Piya Tawichai, told a news conference. “I would like us to warn the children and youth: participating in these protests could impact you in the future.”

Protesters chanted for the release of some 40 activists arrested this week. Some also called out insults against the king – until recently almost unheard of behaviour in a country where the constitution says he must be revered.