Rescuers working to save the survivors of Australia’s largest ever mass whale stranding say more than 70 animals have now been successfully returned to deeper water. 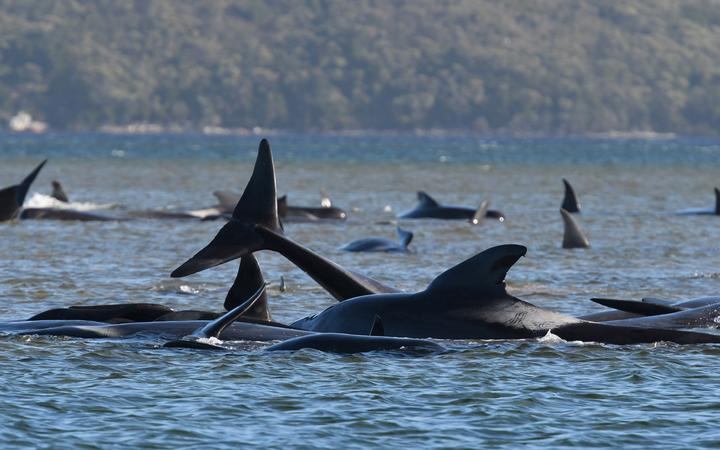 A pod of whales stranded on a sandbar in Macquarie Harbour on the rugged west coast of Tasmania. Photo: AFP or licensors

About 270 pilot whales became stranded on a sandbar near Strahan, about 190 kilometres from Hobart on Tasmania’s West Coast, earlier this week.

Another 200 were found, mostly dead, about 7 to 10 kilometres away after an aerial scan yesterday.

Rescuers will today focus their efforts on the returning the remaining surviving whales stuck on Fraser Flats, in Macquarie Harbour, to deeper water.

Yesterday Tasmania’s Parks and Wildlife Service confirmed 380 of the whales had died and that 50 had been rescued.

Nic Deka from Tasmania’s Parks and Wildlife Service said about 20 whales were “viable” and looked strong enough to be released today.

Euthanasia is being considered for four whales.

Wildlife biologist with the Marine Conservation Program Sam Thalmann described the effort to re-float the animals as “challenging”.

“But the rewards as we have seen over the last few days with over 70 animals released are great and they’re very much well worth the effort,” he said.

Thalmann said the rescue mission has been positive so far, despite the number of animals who have died.

“In a mass stranding like this, massive attrition early is a common thing,” he said.

“For us, within two days of operations, three days from the stranding, to have 70 animals [saved], that is a win.” 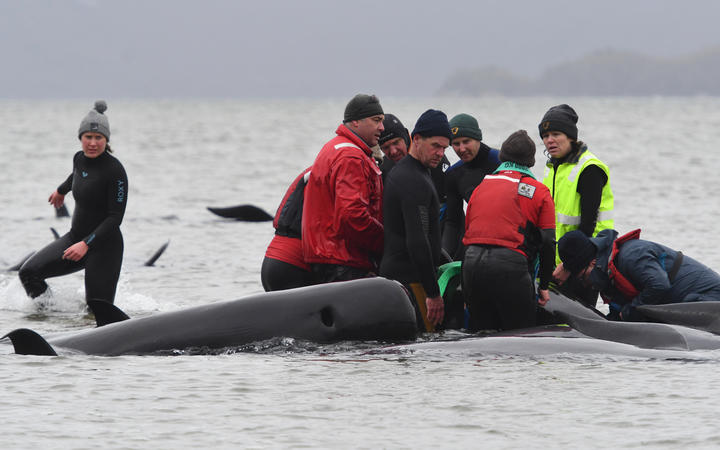 Rescuers faced a race against time to save nearly 200 whales stuck in the remote Australian harbour. Photo: AFP / Brodie Weeding / The Advocate

Weather conditions in Strahan are also working in favour of the remaining surviving whales.

“They are semi-buoyant, it’s cold and wet, it’s good for whale health at the moment,” Mr Thalmann said.